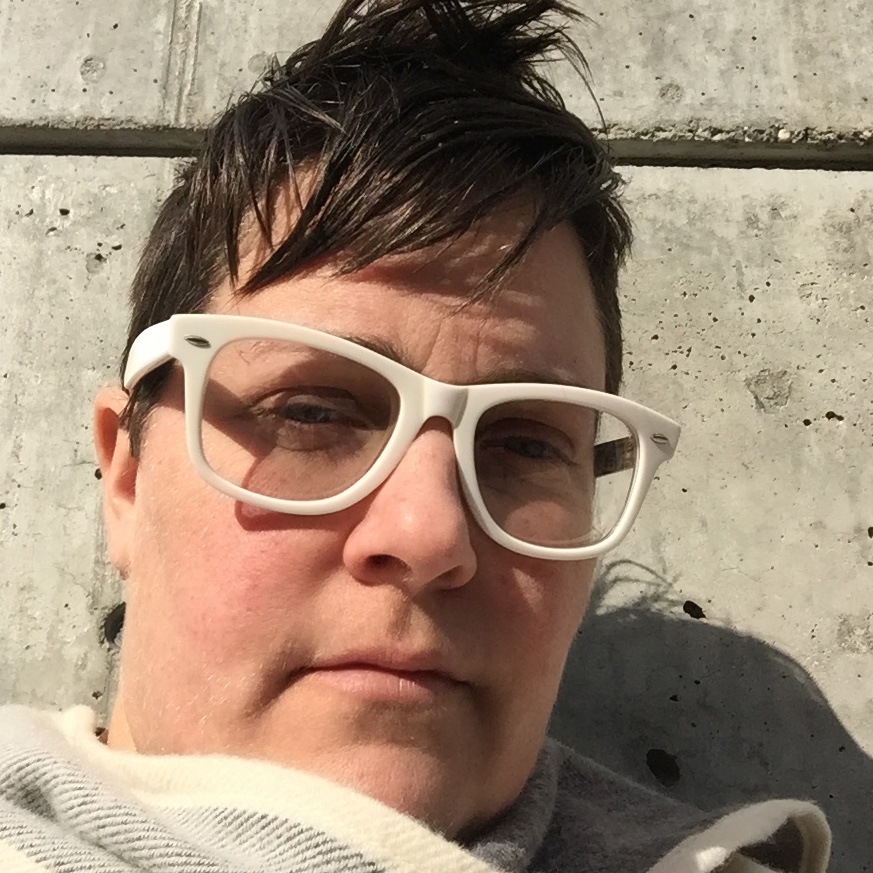 “Ultimately, my one piece of advice would be: bring people together. Find ways to get people around the table and talk, share, make a new thing or event together. This is how you change the world” – Kate Okeson, ’97

My name is Kate Okeson (she/her), and I graduated from Mason Gross in 1997 with a degree in visual arts. When I was a freshman at Rutgers I found myself attending my first meeting at an extracurricular club that we soon named BiGLARU. I had only been on campus for two weeks, however, I met 5 people that evening, had vibrant conversations, and walked out that night a co-leader. In that first year, we grew the student organization’s reach (social and academic events), responsibility (working the hotline), and had a great time engaging the Rutgers New Brunswick community with fun and politically visible means of outreach. BiGLARU grew from a small attendance of six to more than 50 people attending our meetings within only a couple of months. In the next 18 months, we made a mark on Rush Week (“Rush Queer”) and hosted many important voices, one being Dorothy Hajdys-Clausen, the mother of Allen Schindler who was a naval officer who was murdered as a hate crime in 1992. The whole time with BiGLARU was a positive story, however, there was a visible divide in communities. There were two other significant queer organizations on campus which created some organizational “static” at times; LaBIA (Lesbians and Bisexuals in Action) and another organization which catered to bisexual people and their allies.

I am a mother of a wildly entertaining 13 year old who is also an empath. I met my partner at Rutgers in 1994. We were not together then but we got back in touch 11 years ago and have been together for the last decade. In my free time, I work in local democratic politics by working with an open and out elected official to create dialogues on intersectionality in politics. For the last several years I have worked on campaigns, strategy, and messaging to promote democratic ideals and connect candidates and constituents so that the next generation knows that representation is possible and accessible.

Currently, I am an out High school Art/Art History Teacher as well as an artist making work as a queer-identified woman. I address a number of queered ideas, but mostly the notion of the spaces in between identities, in between the places that are named or addressed by others and the location you actually occupy. I look at these spaces as liminal spaces that are inhabited between what I see myself as and what the world sees. I am a co-founder and the director of Make it Better for Youth (makeitbetter4youth.org), an organization that addresses the social and educational outcomes for LGBTQIA youth. Most recently we hosted our first an inter-generational potluck with LGBTQ teens and LGBTQ older-adults. We are looking to host this event quarterly and develop an oral history project around it. Jan Moore, one of the women profiled in the documentary “Love Wins”, was also a participant in our potluck.
As a teacher, I am wildly committed to my students. Even in challenging times and with populations and communities that appear to be less open or accepting, I have worked to make things better for the future generations so that more families and schools are ready to accept young people for who they are and resist all the impulses to make them change or conform.