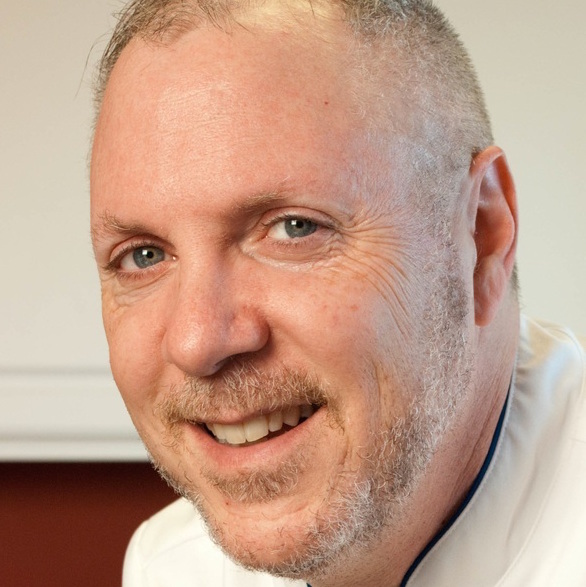 “If I had to give one piece of advice to current LGBTQIA students, it would be to know our history, but make your own path.” – Dan Kaufman, ’89

My name is Dan Kaufman (he/him), and I graduated from Rutgers College in 1989, majoring in visual arts/graphic design. Because we were challenging the administration to address the needs of the LGB community, we were in the Targum a lot. When you put yourself out there, you also open yourself up to criticism. One day, a particularly homophobic letter to the editor was published, and I read it on the bus on my way to a class. I arrived in a state of anger, and was visibly distressed. My professor, an African-American woman, asked me what was wrong, and I just blurted out: “How do you deal with the constant discrimination?” She replied, “You learn to develop a thick skin.” It was in that moment that I saw more clearly our common struggles for acceptance, dignity, and equality.

There were so many positive experiences I had at Rutgers, but one of the biggest turning points in our efforts to have our concerns recognized was when we held a town hall meeting. Individual members of the university community were given the opportunity to share their stories with the administration regarding what it was like to be gay on campus. These stories were moving and deeply personal, and I think that event really showed the administrators the depth of our daily struggles to be who we are while still navigating our educational experience.

After college, in the early ‘90s, I continued my activism by being a part of ACT UP/DC and volunteering in various gay and AIDS groups. I’ve also sung in the Gay Men’s Chorus of Washington since 1990. These days, you can often find me baking hundreds of muffins or cookies or cupcakes at Food & Friends, a meals-on-wheels organization that provides nutritious meals free of charge to people living with HIV/AIDS, cancer, and other life-challenging illnesses. In 1993, I started a promotional products marketing company called DKG Promotions, of which I am currently the president. For the first 10 or so of those years, a large part of the business was a Pride merchandise mail-order company. I sold my own designs of buttons, t-shirts, bumper stickers, postcards, and things like that. Sometimes people would come up to me at Pride festivals and tell me they had come out to their parents after reading some of the things I wrote, which thrilled me to no end.